Everyone needs a friend like my friend Barbara! When I went this week to purchase a sheet of Owney the Postal dog stamps that were released in July, 2011 for my stamp collection, of course, not one was to be had in all of NYC. So, whom do I call for these kinds of dilemmas? Barbara! Barbara lives in DC and works near the National Postal Museum, which has a gift store with difficult to find stamps. Yesterday, my coveted stamps sheets arrived in the mail, thanks to my loyal friend, who knew this little acquisition meant more to me than any “normal” person.

Owney was a tatty little Irish terrier mix that became a mascot of the Albany, New York post office in 1888, when he was discovered curled up on a pile of old mail bags one day. Owney began accompanying the mail bags onto horse drawn wagons and then subsequently onto the Railway Post Office train cars all over the state and country. He even made an around the world trip in 1895. The mail clerks considered Owney was a good luck charm, for even though train wrecks were a common occurrence  back then, no train that Owney rode on, was ever in such an incident.

Owney marked his travels with medals and tags on his collar. When a certain Postmaster General John Wanamaker learned that the collar was becoming too heavy for the mutt, he created a harness to display his tokens. The circumstances of Owney’s death are unclear and not documented accurately, but Owney had become old, nearly blind and a little ornery. He died of a gun shot wound on June 11, 1897. His remains were preserved and they are on display at the Smithsonian Institution’s National Postal Museum, the very museum where my commemorative stamps were purchased, and where one of my decorative envelopes was awarded a prize in 1999 and was on display under Owney’s watchful eyes that year. Owney wears his harness and is surrounded by his tags in the museum.  Countless books, movies and stories have been written about Owney. Owney even has his own multi dimensional app! 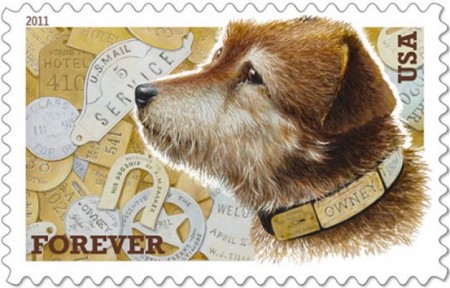 In case you are new to Chiocciola Posta you will have to catch up in the old posts listed in the Categories over there.  In a nutshell, I coined the phrase as a fun way to say Snail Mail, but in Italian, because it just rolls off the tongue so nicely.  I listed 10 reasons to send Chiocciola Posta Holiday Cards on our Facebook page.  I discovered my first Holiday Card in my mail slot yesterday and it made me smile.  I always appreciate any greeting, no matter the method of sending, but when I see a person’s handwriting on the envelope, it just gives my heart a little glow.  No one has captured the joy of sending Snail Mail on film better than Jamie Beck of From Me to You.  Here are some of her images: 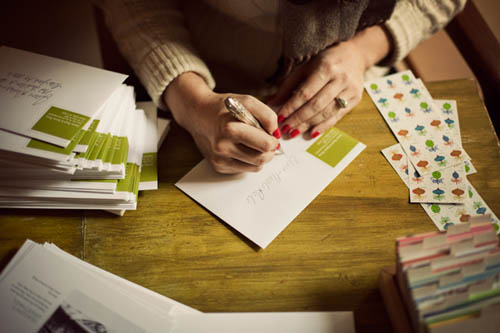 Can you eek out an afternoon, with cocoa nearby, to pen just one personal line in each greeting? “It was lovely to see you last week!”  or “I hope you are making those fabulous toffee bars this year!” or “Enjoy your first Christmas together!” 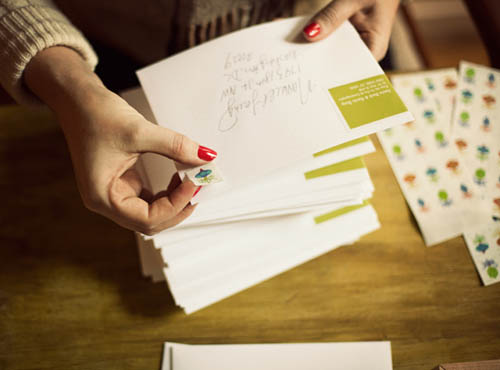 Come on! Putting on the stamps is fun! Plus, we have to do our part to keep the postal system afloat! 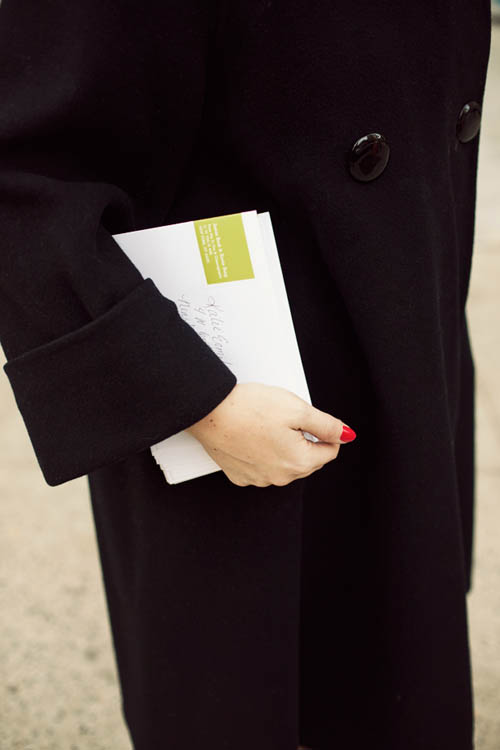 Just paint your nails red and off to the post office you go!

There’s plenty more images to see over at Jamie’s blog including the best one of slipping the cards in the post office box. I can just hear that celebratory CLANG! as the lid snaps shut! It is as satisfying as a piece of extra dark chocolate at four in the afternoon.

Tags: From Me to You, Holiday Cards, Jamie Beck, Post Office, Snail Mail

Today, as I hastily sent a message from my iphone in an abrupt four words,  I was comforted to see the tag line “Sent from my Iphone.”  This let my recipient know why my message was so abbreviated, and out of character from what I would normally send via Chiocciola Posta.  When I saw this telegram on one of my favorite sites, Letterheady,  I realized that the iphone message is the modern telegram. 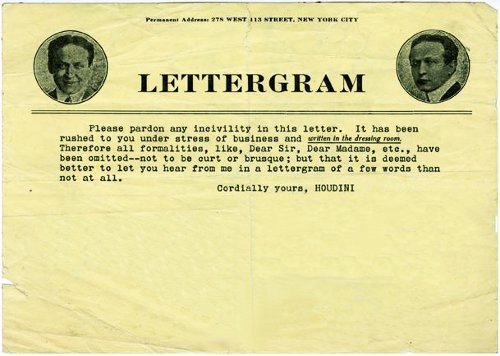 Did you see the PBS special last night on themagnificent Cuban Snails? I want my mail to be delivered by these arrestingly graceful creatures! I want to imagine that these gorgeous gastropods glide along through starlit nights, couriering Delicate Pen wedding invitations to unknowing recipients, leaving a magical, glittery trail in their path! We can’t really call these snails Chiocciola Posta since they are Cuban! We’ll call them Cuban Gastropostal Carriers or the CGC.  They have quite the mating ritual! The snails are becoming endangered, however. Read about the snails and their interesting advances of love, or watch the full episode about them at www.pbs.org.  Thank you to Henry Domke of Henry Domke Fine Art for providing this beautiful image. 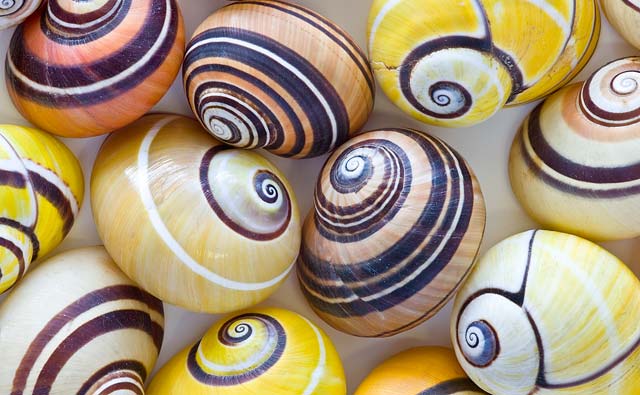 I am posting an unusual, unscheduled Tuesday post to let you know that we were featured on Amanda Pearl’s blog today. Click here to read it.  It is such fun to know people appreciate the Chiocciola Posta I send, and better yet, to inspire them to send their own. Amanda and I are working on a secret project together!  We’ll share it with you when it is complete. 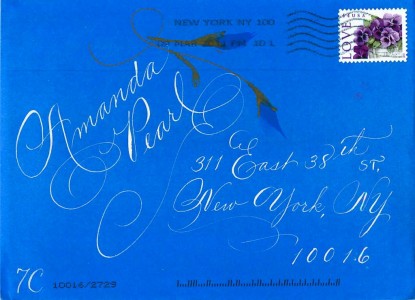 I remember Princess Diana commenting in an interview once, that she would feel obligated to stay up until the wee hours every night penning all of her thank you notes for the events and kindnesses that had occurred each day.  Certainly we don’t want to put that kind of pressure on ourselves, without a staff to assist us, but, can’t you just imagine her in her boudoir in Buckingham Palace, poised over an ornate desk, with a cache of engraved stationery, and beautiful pens at hand?  (We would be happy to help you gather such supplies!)   All you need is a writing nook! As you conclude your day, slip on some Peter Fox satin slippers (our favorites) and a silky robe. Pretend you are a princess and start writing! One of Diana’s thank you notes raised $800 pounds for charity alone, so you never know what good may come of a single note!
. 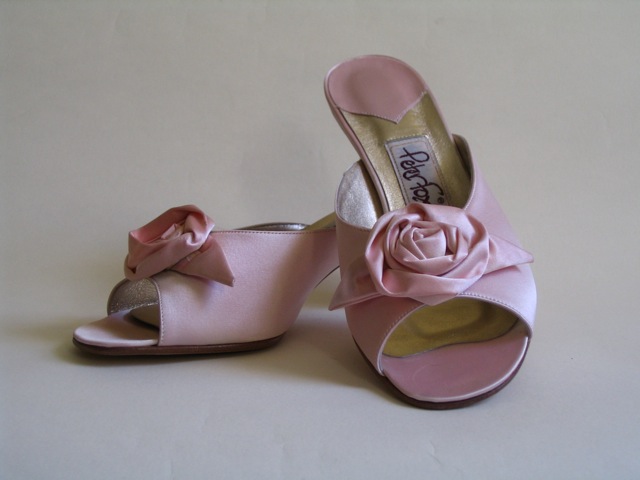 A Peter Fox satin slipper,  fit for a princess,  and you!