You know we love paper here at The Delicate Studio,  so imagine my delight when spying Bergdorf’s window devoted to a theme of paper! The holiday windows at Bergdorf’s are never to be missed and this year was no exception.  The windows paid homage to different mediums such as shells, wood, brass and yes our favorite paper! 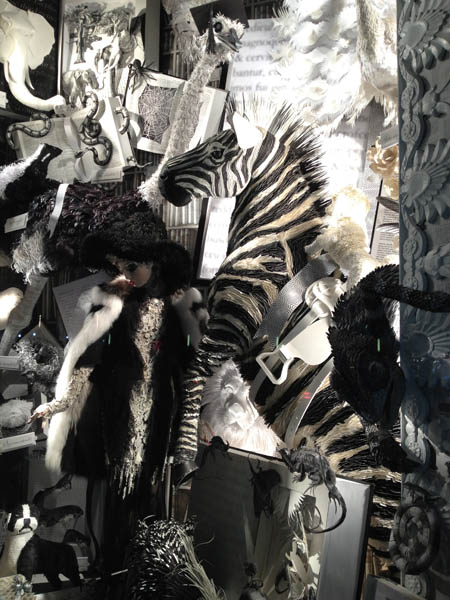 This window was entitled “Teacher’s Pets.  Snappy dressed teacher, don’t you think? Her pets were all ingeniously crafted from paper- a large zebra, ostrich, peacock, skunk, spiders, all made of paper! 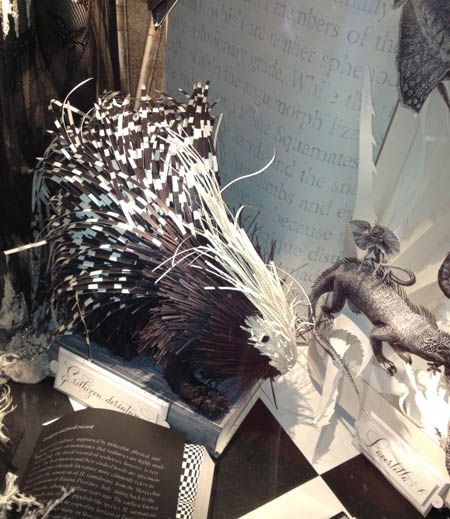 My favorite, a porcupine. Love all the lettering lying about too! 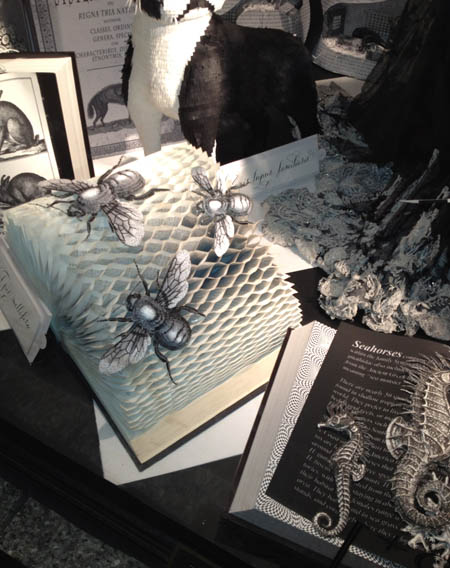 A honey comb and seahorses. 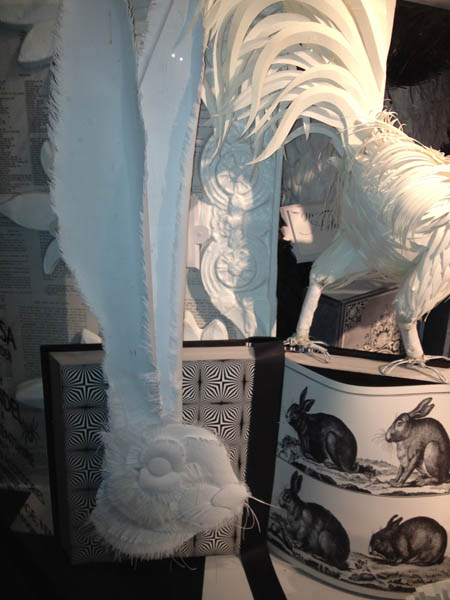 A hare’s ears and a rooster’s feathers….also made of paper!

It’s here! The long awaited NYC opening of our very own LaDurée, the Parisian patisserie, is here.  I waited a couple months for the intial hoopla, and thus the two hour lines to die down, so I only had to wait half an hour to buy some macarons as a gift for a friend. (They were sold out of the caramels…the candies…and the chocolates.) I love a true shopping experience, and I got one here! I have not been to the patisserie in Paris…mental note: go to LaDurée in Paris..but people in the know say everything is up to snuff in this Big Apple version. 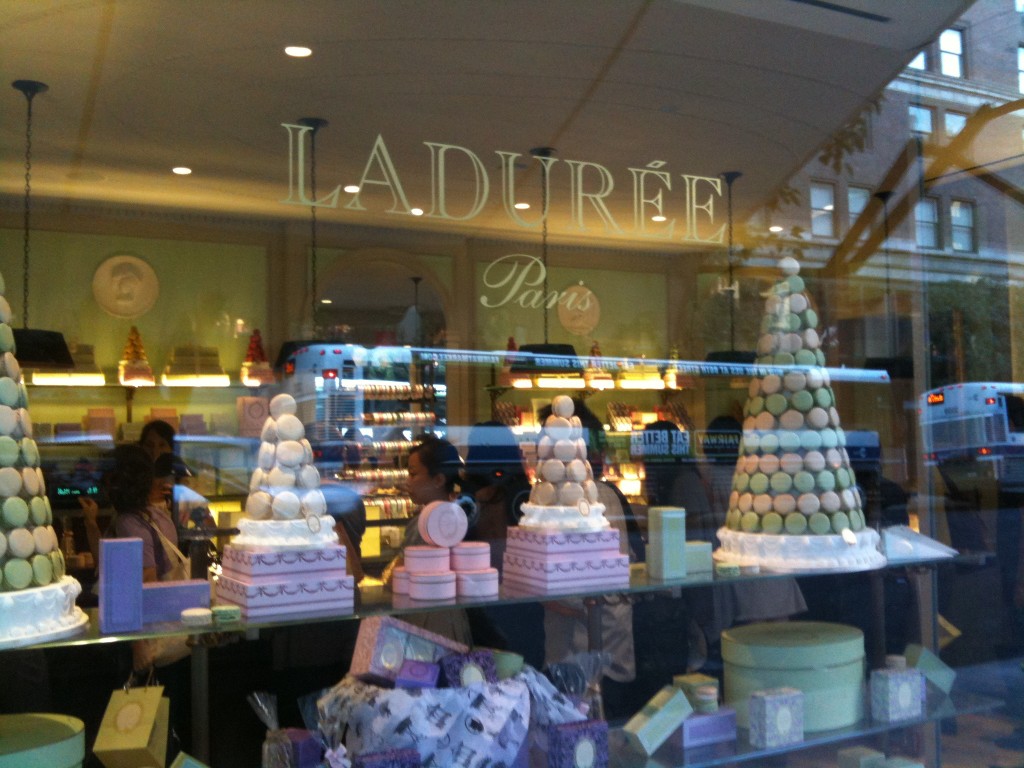 The two complementary fonts on the front window are perfection.  I am already hooked. On the cue I go! 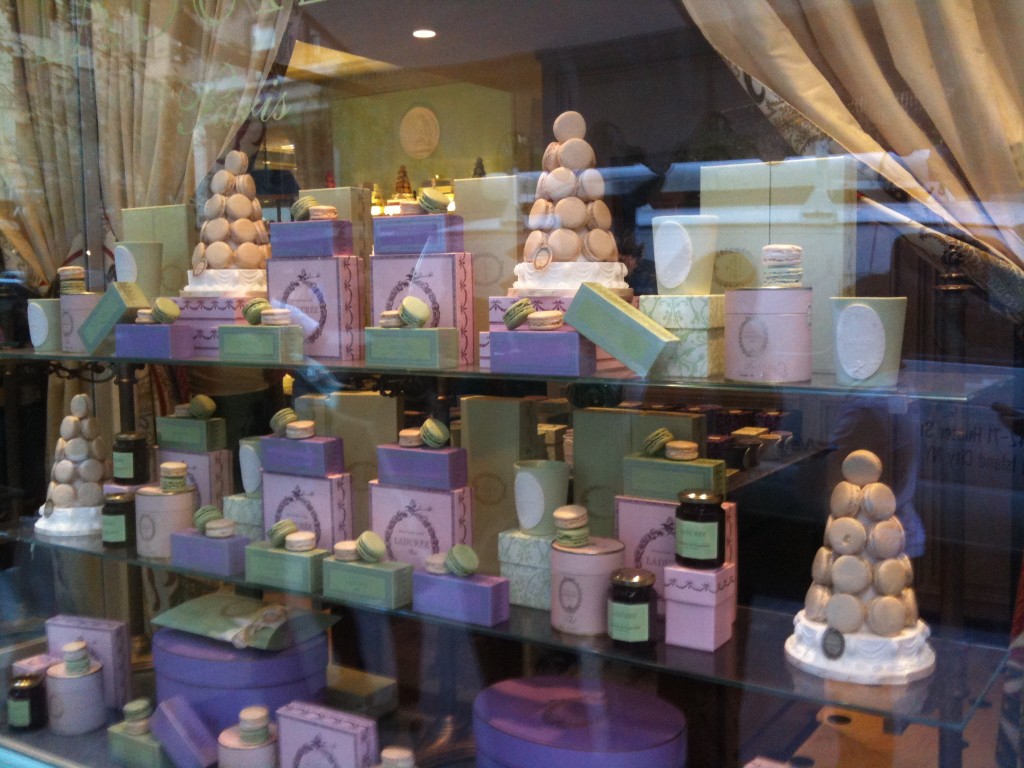 Studying the color combinations will surely keep me occupied for the half hour wait until I hit the front door. 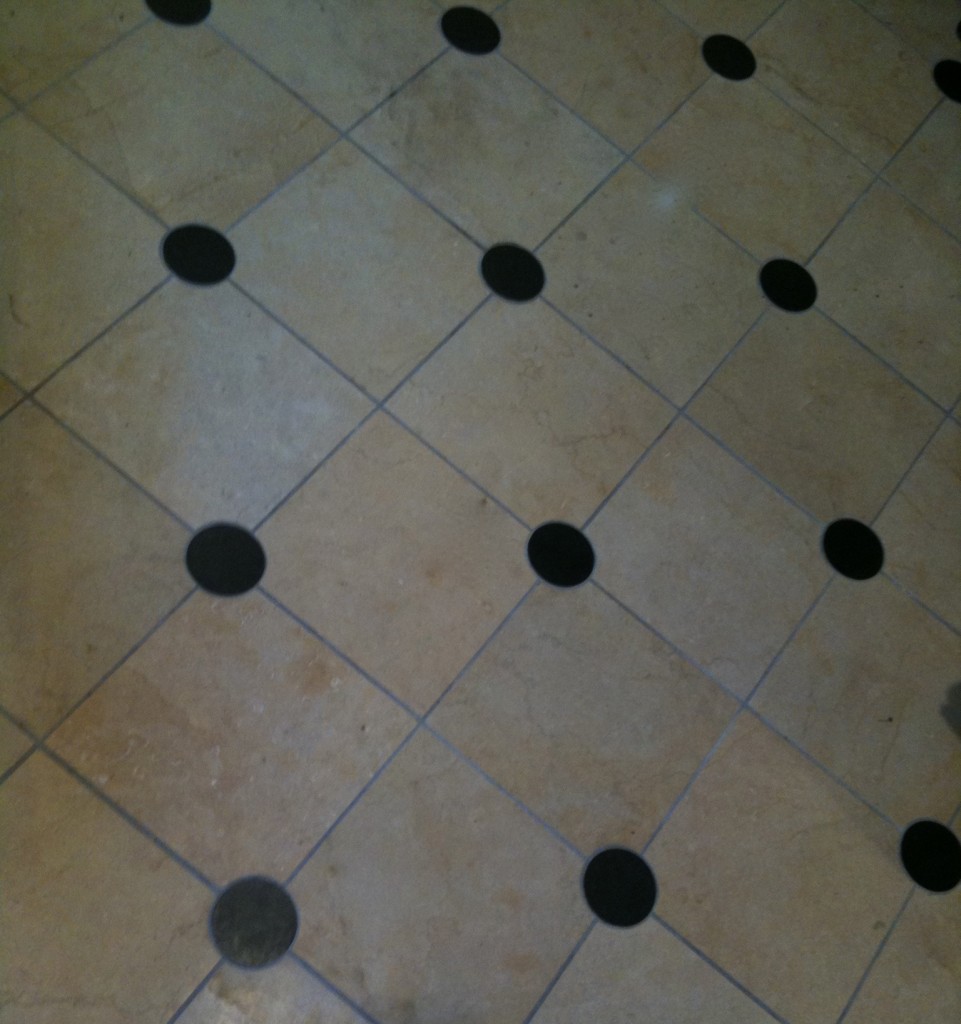 Thirty-five minutes. I’m in!  Even the floor is stylish! 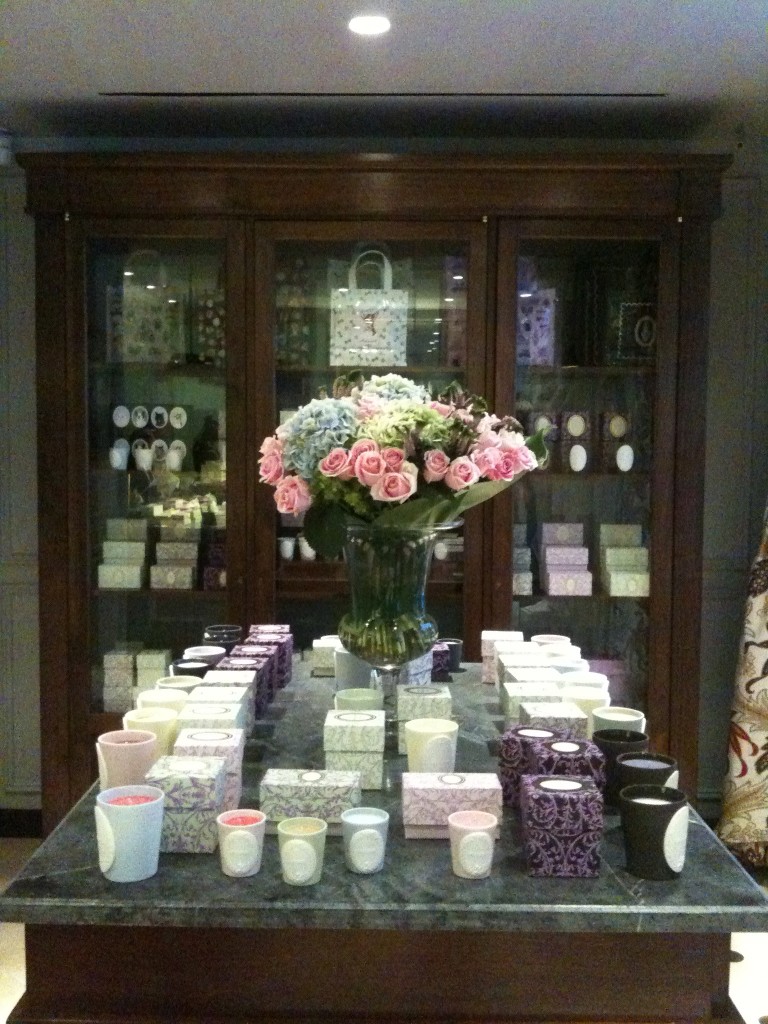 The candle and gift boutique.

The flower arrangement alone was worth the wait, and it looks like I will be waiting- as each customer is given proper time to inquire about and select the flavor of their macarons. 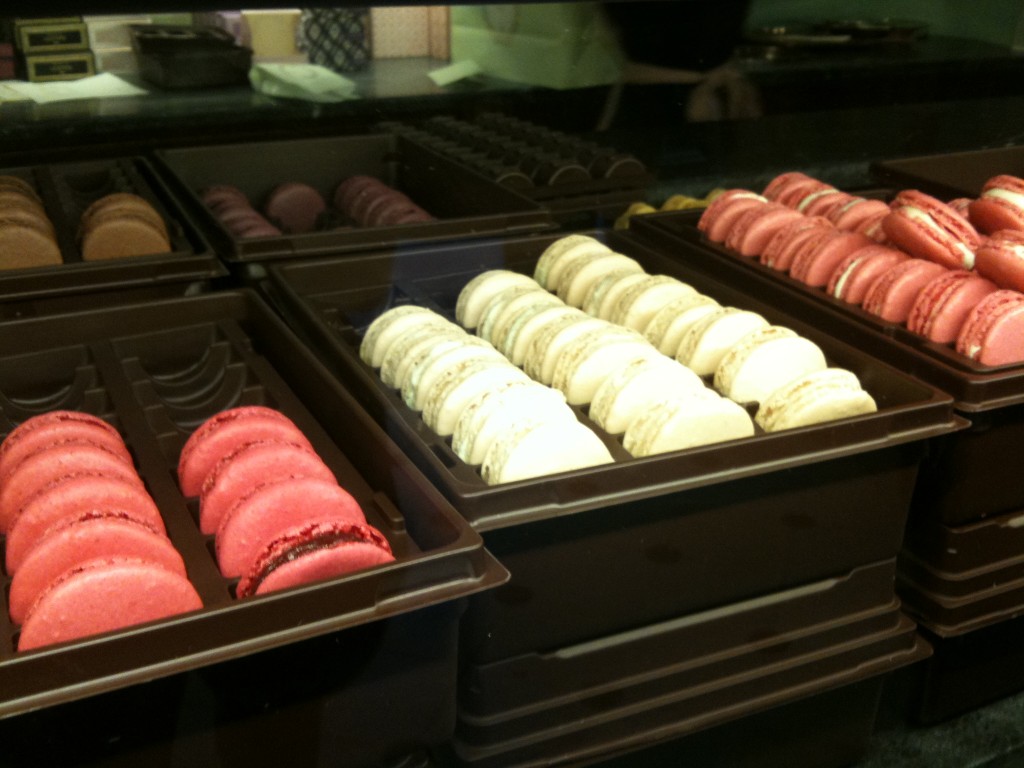 “Pierre, oh Pierre….(his name really was Pierre)… One of each please… in a gift box! Oh, and an insulated bag to safely carry them on my 8 hour drive to deliver them. Three different pinks? How French! Mercí!” 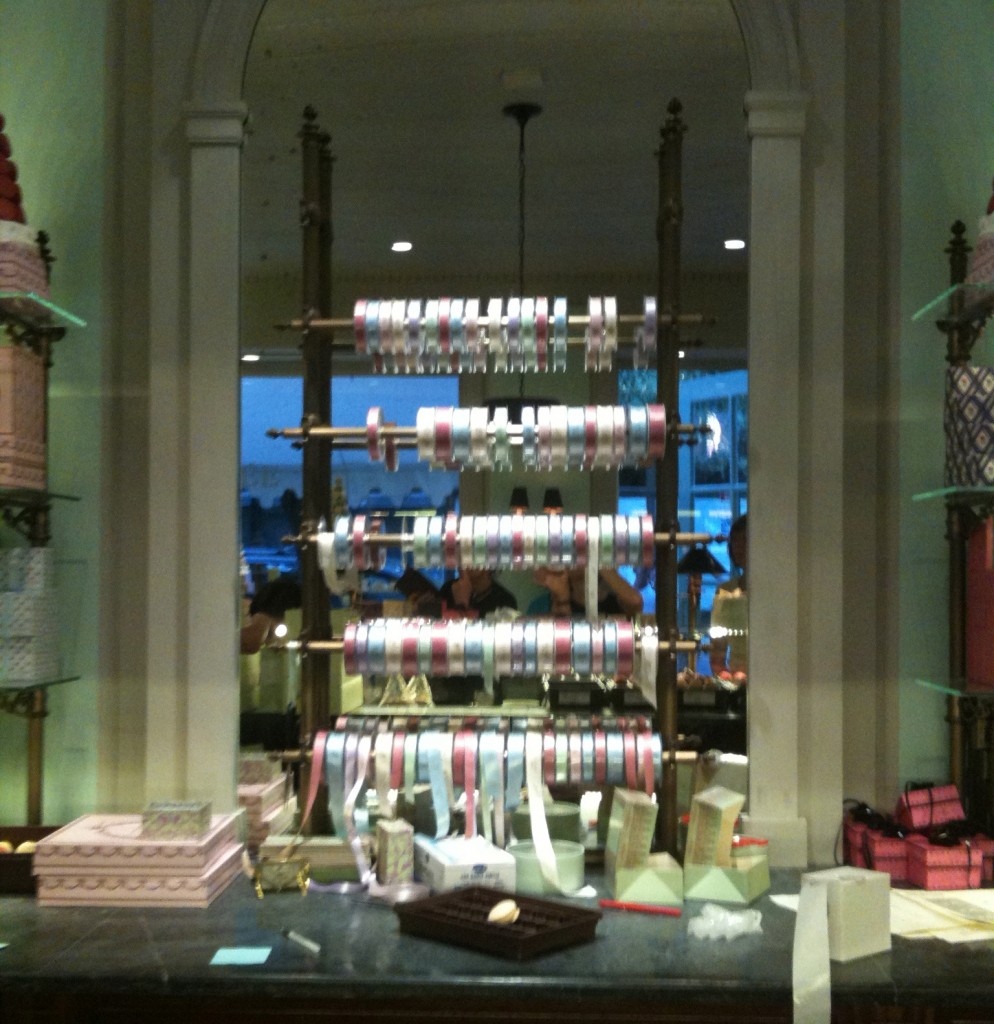 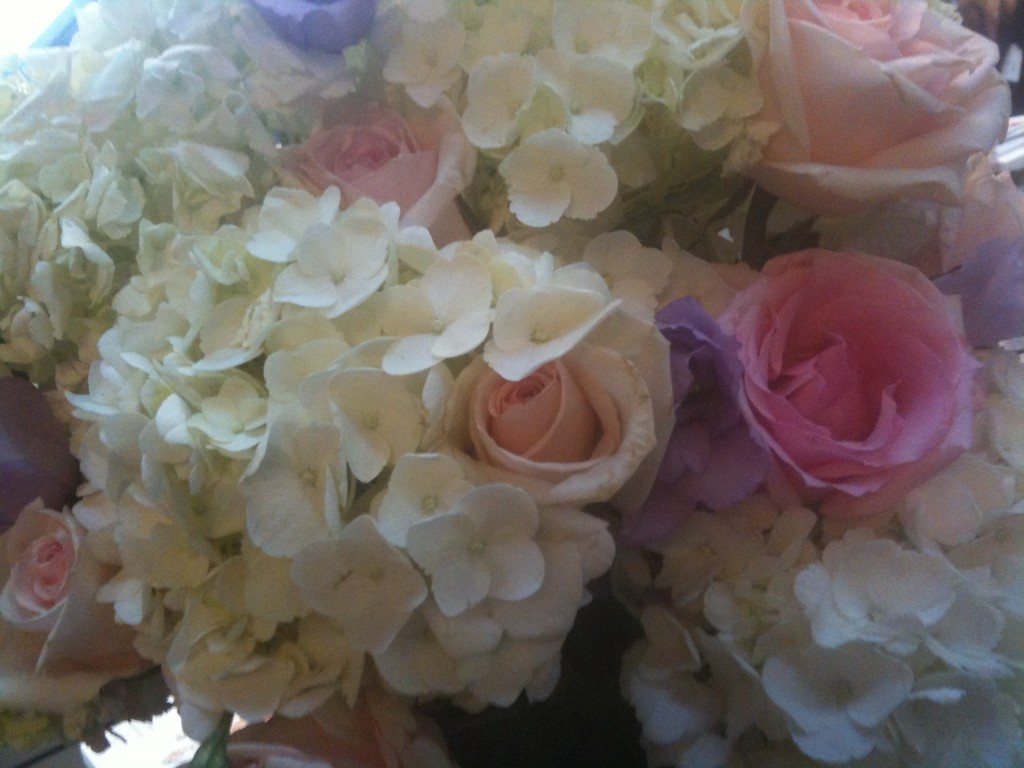 One last look at the flowers!

Worth the wait. A perfect wedding favor idea too. The Delicate Pen could create some lovely gift tags for you! 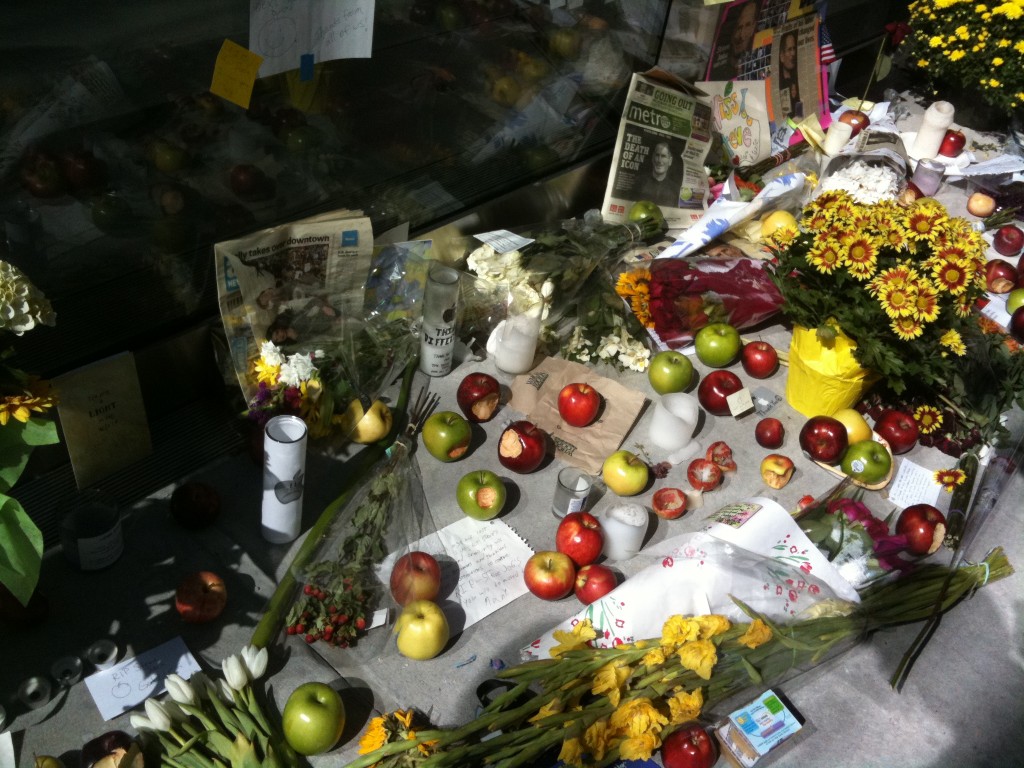 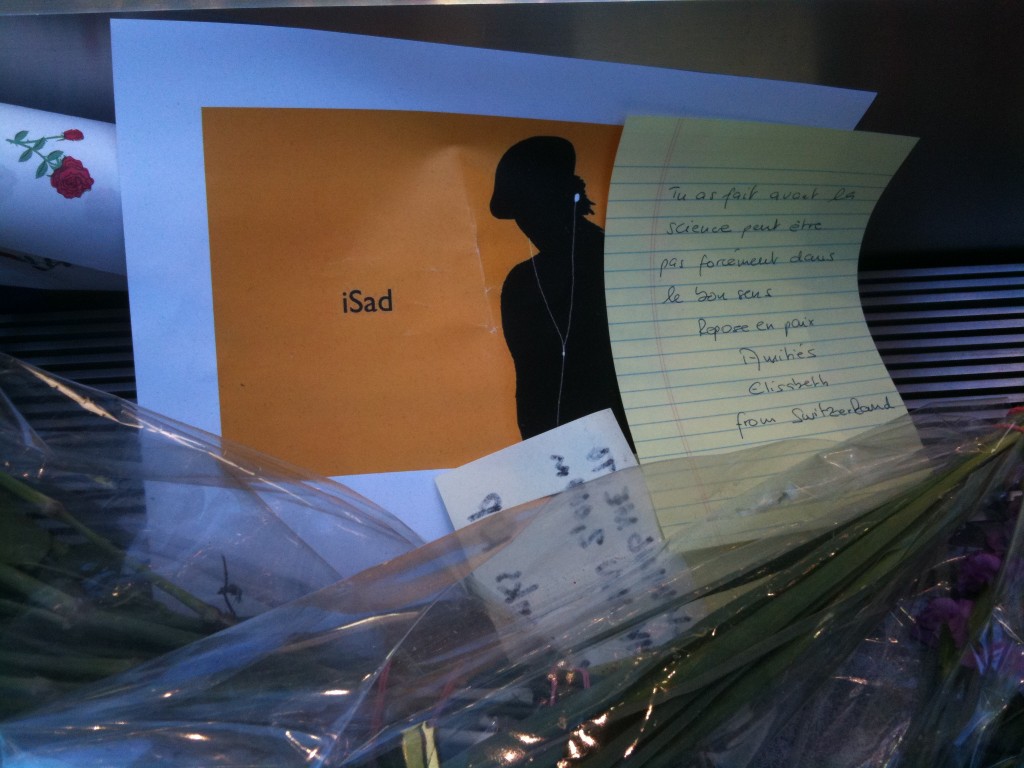 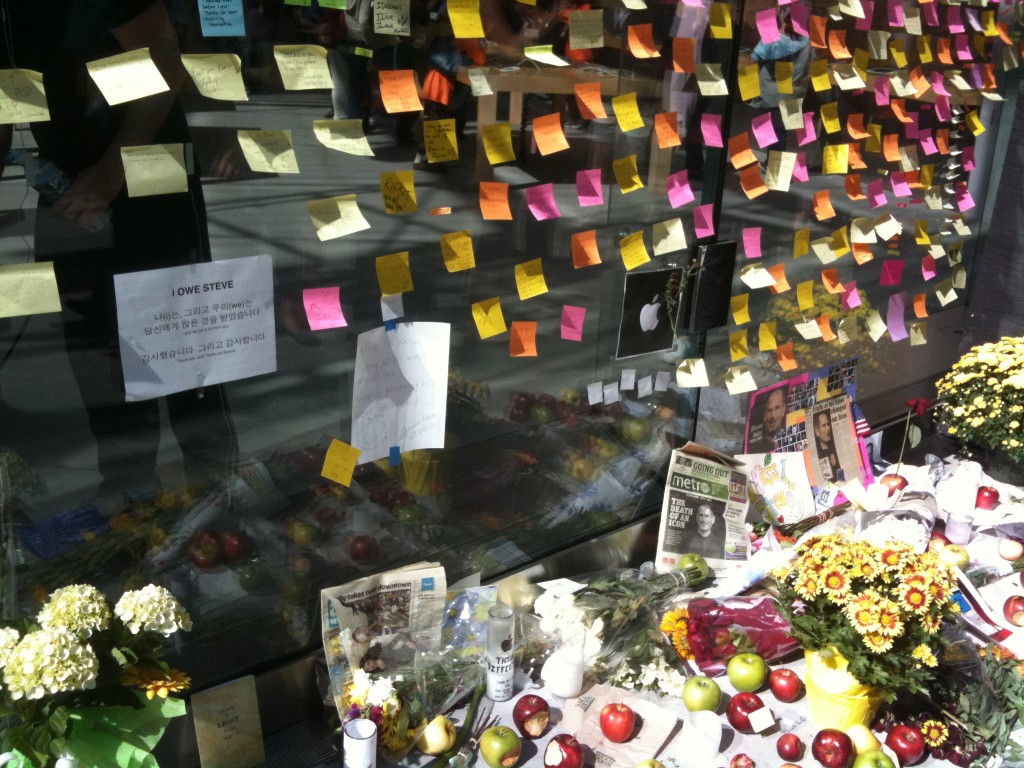 A great treasure of New York City is the Ziegfeld Theatre.  The Ziegfeld was built in 1927 as a Broadway theatre. It was sadly razed in 1966, but eventually relocated and rebuilt in 1969 as a movie palace. It is now is the last remaining movie palace in New York. I recently saw The Help there and while I always enjoy a good movie, the real thrill in seeing a movie at the Ziegfeld is surveying all the Ziegfeld Follies Girls’ shoes and boas and programs that are in glass cases lining the lobby walls.  Doris Eaton was probably the youngest Follies Girl, and also was the last remaining one, until she passed in May of 2010. The finite end of the era. Many of her costume pieces are on display. 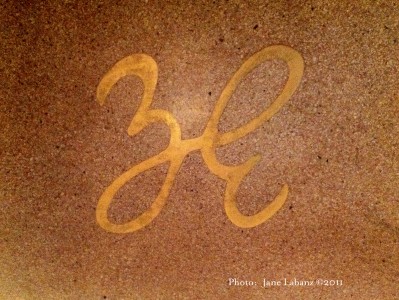 The playfulness of the letter Z that is in the sidewalk as you enter the theatre is a delightful ambigram. 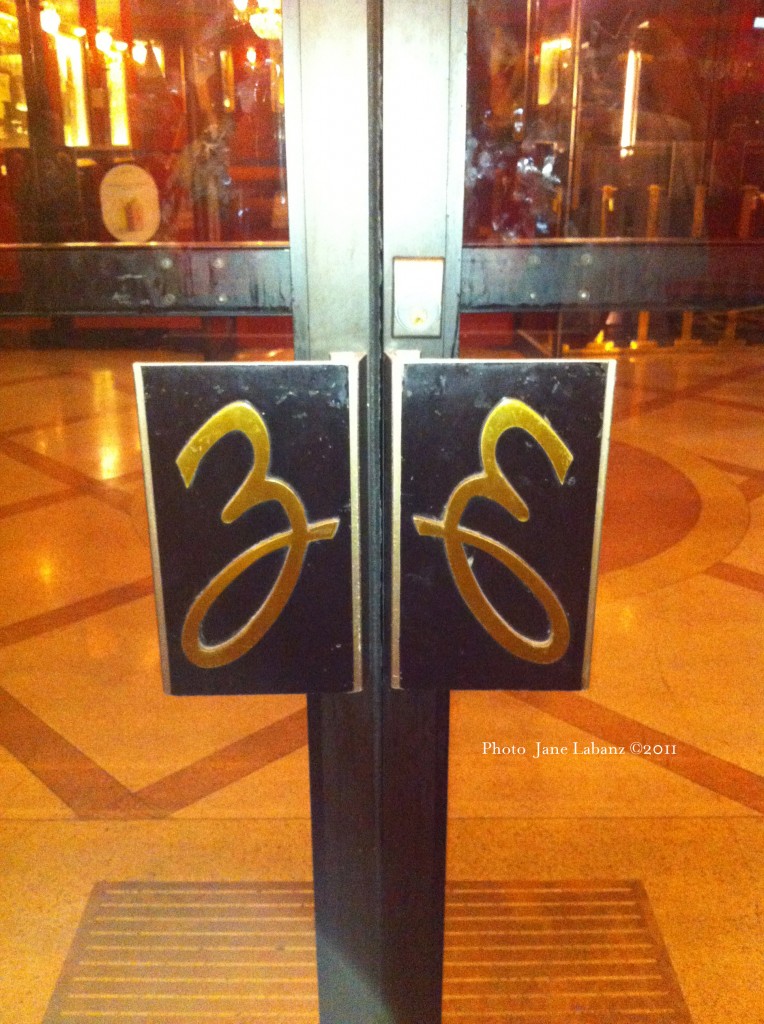 The Z’s also work in a mirrored fashion on the door handles. A fun idea for a new couple’s monogram.  Let’s see what other letters I can flip and flop in my work today!

When NYC enjoyed a picture perfect 75 degree day this week,  I took a break and ran down to catch the Macy’s Flower Show, one of my favorite springtime rituals, only to find I was one day late! At first I was immobilized by disappointment,  but I quickly tracked down other flower displays in the city that seemed to have sprung open over night, as if on cue, all at once!  What inspiration-I couldn’t wait to get back to my watercolors! 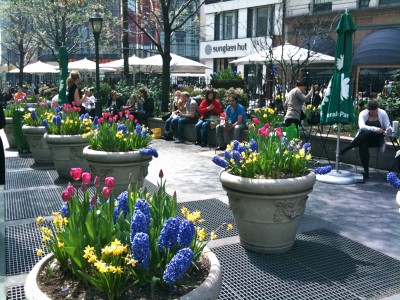 The new public space in front of Macy’s.  You would think it was Paris! 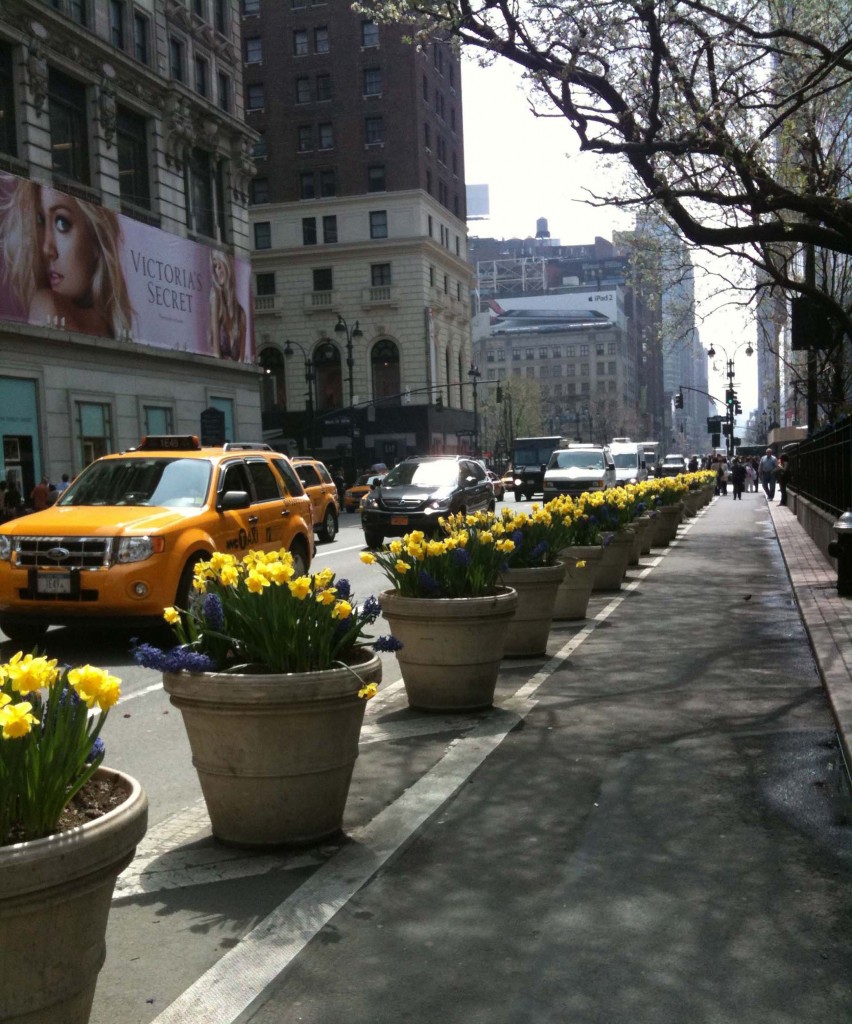 Don’t the taxis look happy next to the allee of daffs? 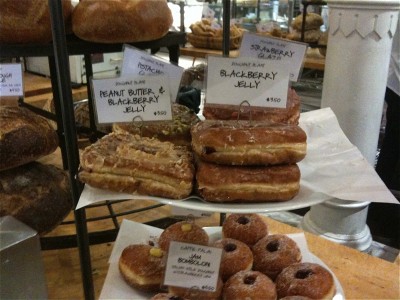 A girl gets hungry from all that color.

I love the detail that Dean and Deluca gives to all their petite signs.  What a fun lettering style. This one single detail of their signature signs sets this store apart from so many others.  Ah, the Strength of Script.

I happened upon these rose sculptures along Park Avenue, while taking a stroll around town. Talk about a pick-me-up!  The display is sponsored by the Sculpture Committee of the Fund for Park Avenue and the New York City Parks and Recreation Public Art Program. The 38 giant pink and red roses are by artist Will Ryman. Half of the roses have been sold already! Some of the petals were designed and sold as chairs. (Really.)

Park Avenue is a street with no buses. On the islands separating up and downtown traffic, there is always a spectacular rotating display.  From January to May this year, these larger than life rose sculptures loom over each intersection from 57th to 67th Street. They are such a perk to the street and city. Better yet, they are a precursor to the annual tulip display soon to follow! 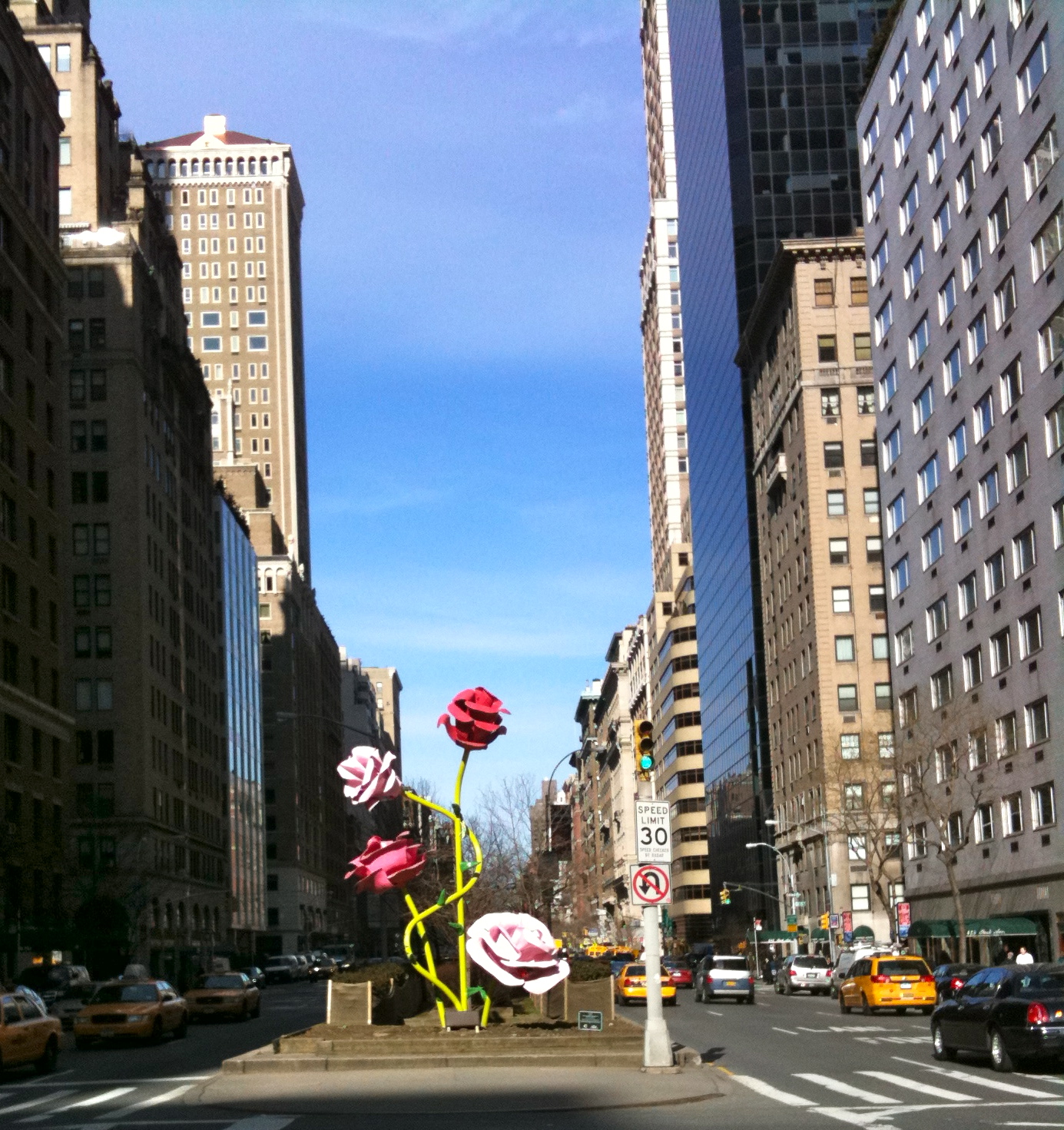 A bouquet of roses rising above Park Avenue 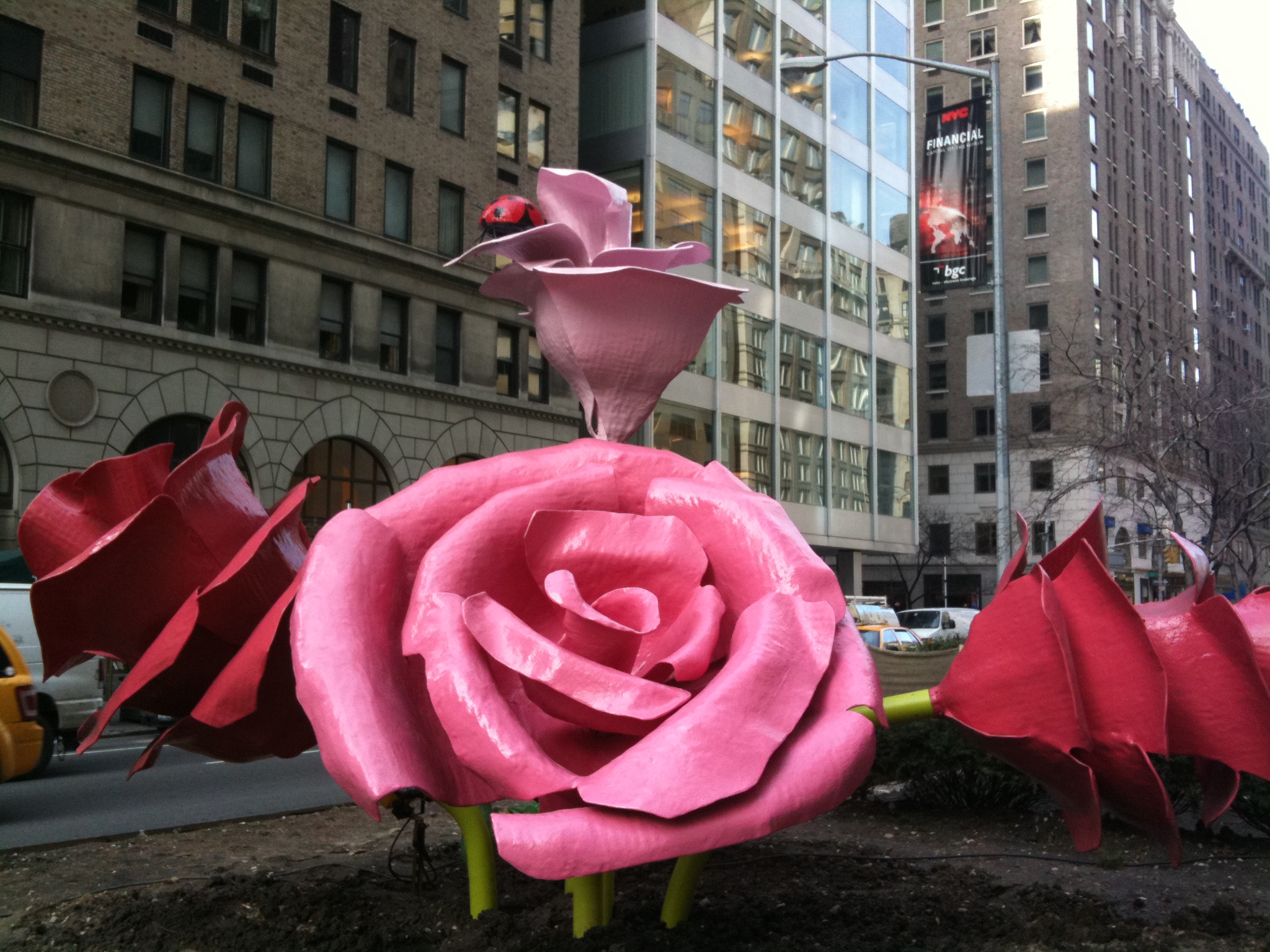 A closer look, complete with lady bug on top! 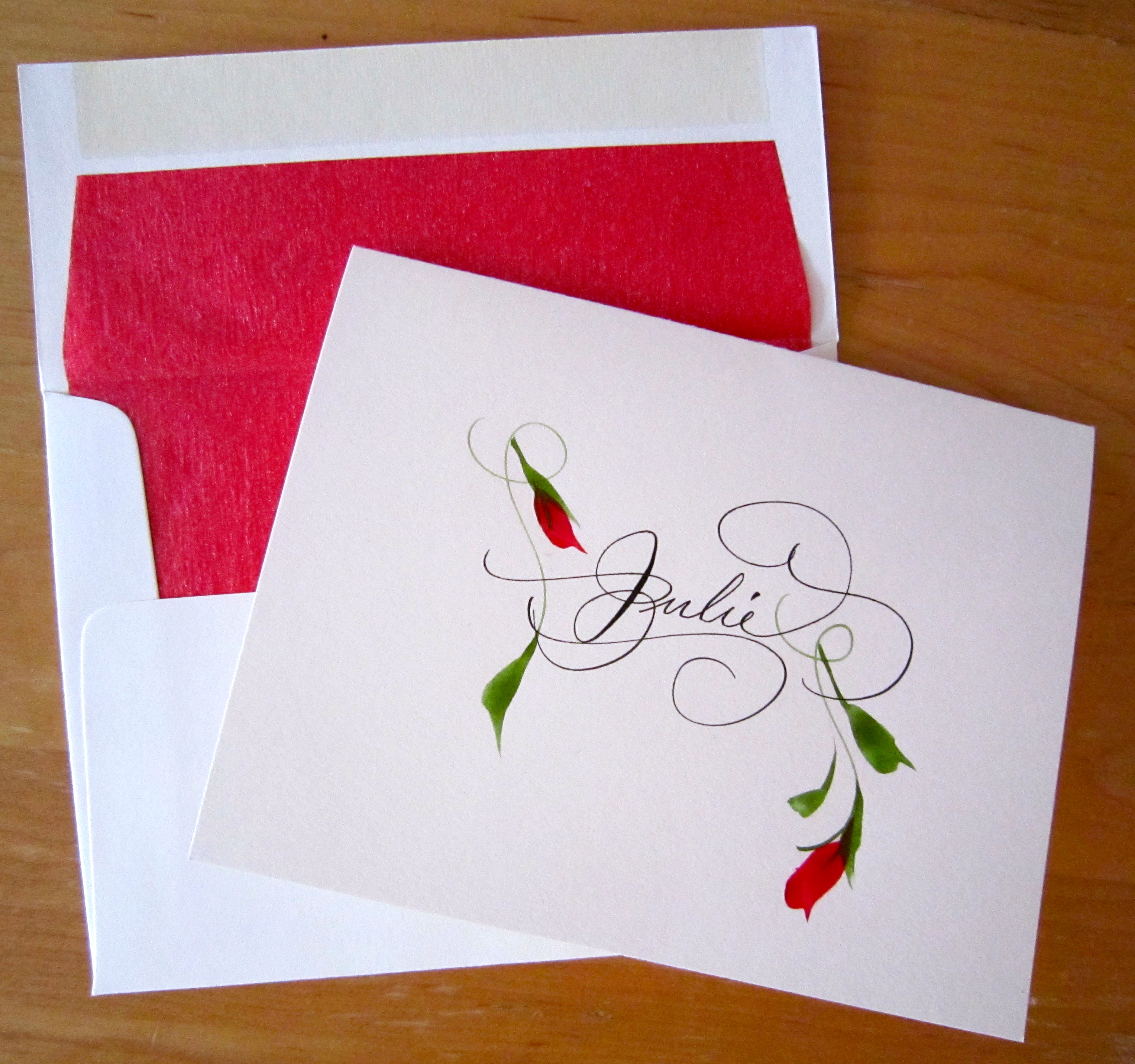 Personal stationery by The Delicate Pen with Red Climbing Roses