I recently had the great pleasure of  being the on site calligrapher for several events for Tequila Don Julio, under the parent company of Diageo.  Since I work solo much of the time, it is wild fun to be injected into a corporate setting every now and then. At several Holiday Happy Hours, I was on site for the purpose of hand lettering gift tags for an extremely elegant bottle of 1942 which has been aged for 2.5 years. The packaging of this deluxe gift item is exquisite, so I was honored to have my hand lettered gift tag considered a necessary addition to an already debonair presentation. 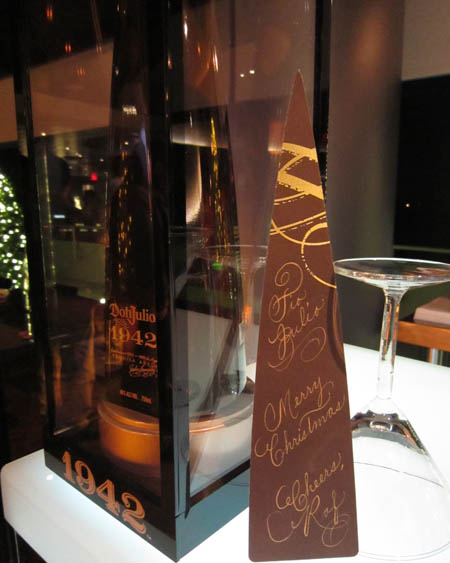 The shape of the tag mirrors the design of the sleek bottle of 1942. A beautiful hand lettered gift tag will always add something special and personal to any gift. 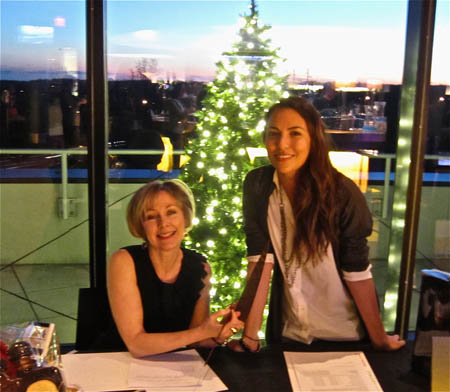 Me and the lovely Zey Halici, from MKTG, who organized the events. 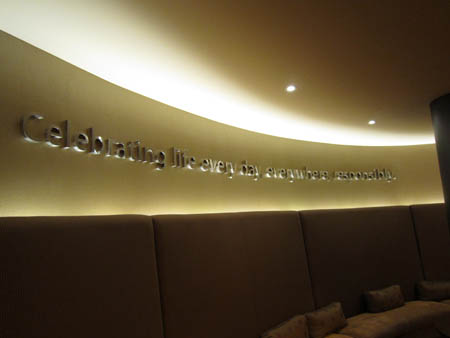 The circular lobby wall of Diageo Corporate Headquarters in Norwalk, CT, where one of the events was held, reads,

I always love an excuse to visit our main post office, the James A. Farley branch in NYC. This is the only branch in the city that will hand cancel letters and invitations, so I frequent it often.  Just running up the stairs to get inside, makes me feel like Rocky. 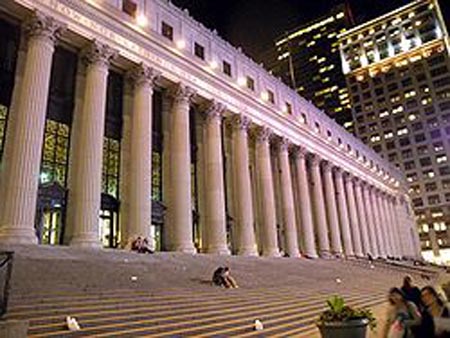 The first thing I usually do, once inside, is look UP! 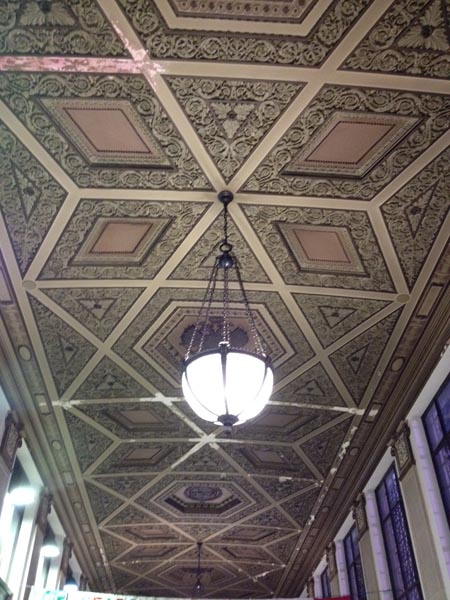 Then, I take a quick look at all the postal artifacts like this bike from the 1940’s. 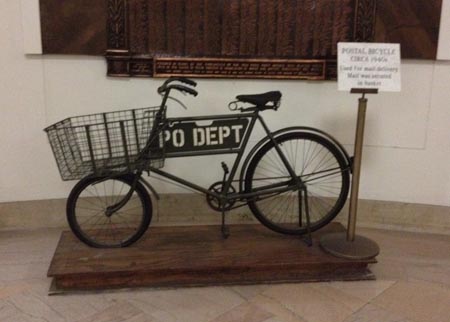 Then, I admire the dozens of green banker’s lights at the marble writing tables. 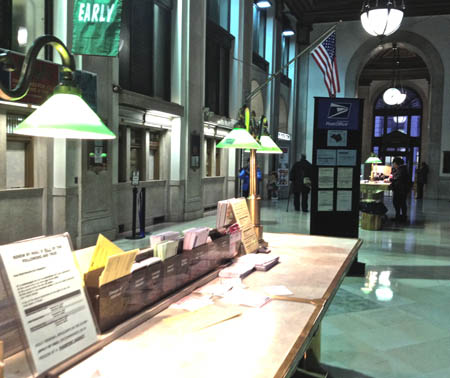 But, what does this have to do with Santa, you ask?  Well, on my way to hand cancel my letters,  I saw THIS! 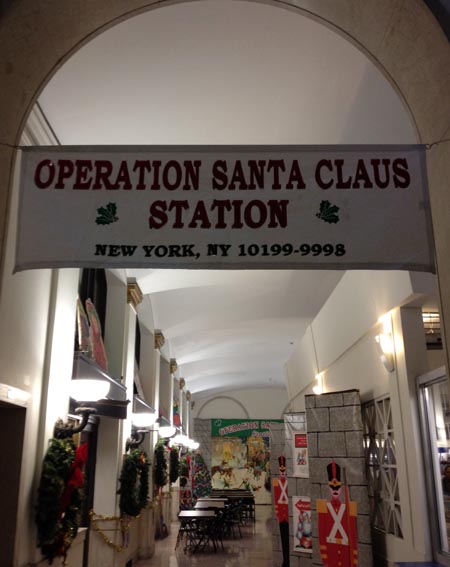 Operation Santa Claus?!?!  What is that? Then I see THIS! 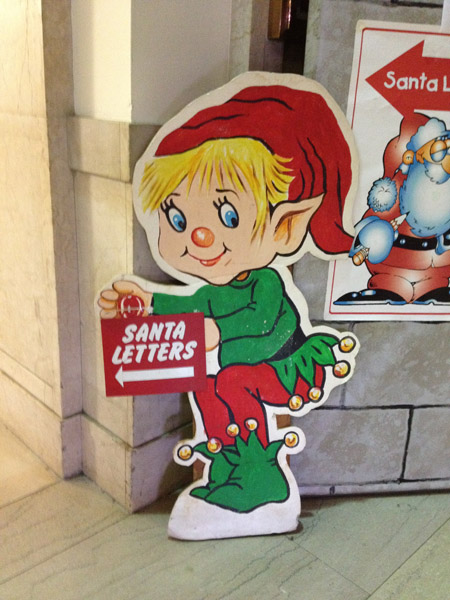 Santa’s Letters? How is it that me, a supporter of Snail Mail (aka Chiocciola Posta), does not know about Operation Santa Claus?

S0, I had a long conversation with the Head Elf at Operation Santa Claus and this is the story! You can imagine how many thousands of letters the post office gets addressed to Santa. (500,000 in NYC.) Mail without complete a address normally gets returned to sender with the message “Undeliverable as addressed”.  But if those letters are addressed to Santa, they are not returned, for obvious reasons. So in that case, the letters would normally become……I almost can’t say it…….”Dead Mail.” You can imagine what happens in the Dead Mail bin. (Shudder.) Well, starting in the 1920’s, postal workers began answering the letters and sending presents to the children, so that they would receive a gift!  Since then it has turned into a huge operation.

This is how it works. You  show ID and fill out papers, so volunteers can verify that you are a good elf. Then you receive 10 letters from children to review. You can either select one or more from that pile, or ask over and over for 10 more until you find a letter that speaks to your heart. That letter has a code number. You register your number with a postal volunteer. Then you purchase something for that child and return to the post office to present what you will be shipping.Your gift gets boxed up and then you and your package go to the sales clerk where you pay for the shipping. The return address says Operation Santa plus the code number from the letter. The “to” area remains blank and is filled in by the post office for privacy reasons. Postal workers volunteer before or after regular shifts to pull off this operation. Here is a link that explains everything quite well.

I asked the Head Elf, “How do you know the neediest children are receiving the gifts?” His reply was that although volunteers try to determine children of need, Santa does not discriminate. Letters are screened for duplicates and fakes, which they can easily spot, but all children are treated alike. He said even the wealthiest children write to Santa. He also cautioned against assuming someone wasn’t deserving if they asked for a boat or Rolex, explaining that a child asking for expensive items might actually be someone in a homeless shelter in need of socks or a coat. There are post offices in 75 cities participating in Operation Santa Claus. From Cincinnati, Chicago, and D.C., to Austin, Naples and Savannah. You can find a list of post offices here. If your post office isn’t participating, you can also donate to the cause. Reading the actual letters is the best part of the entire experience, however. Some cities simply do not have necessary staff to successfully manage the operation. New York City has the largest program.  Check the list and see if your city participates.  Operation Santa Claus….here we come! We need to ship this week though in order for packages to arrive in time!

And the Winners Are!

If you think you saw the winners listed here one day, and then the next they were gone along with another posting,  you are correct! We had a little glitch on the website and the only way to resolve it was to restore to a back up from a few days ago.  So here we go again!

Little did we know that the evening we decided to choose winners, it was Winter’s Eve in the Lincoln Center area just near our studio.  How serendipitous to make our drawing seem even more festive.  We closed up shop and partook of the festivities.  There were strolling bands, food tastings from all the nearby fine restaurants,  stilt walkers,  ice carvers, and music events at every school, even in bank lobbies.  The local PBS station opened the studio for tours,  the museums had free admission and opera music filled Lincoln Square.  Then at 9 pm sharp (We waited until then so the west coast would have a full day to enter) we dipped three separate times into a glass jar, where we had penned each entry.  Drum roll….the winner of the thank you notes is Don M!  The winner of the crystal box is Kumi! The winner of the custom quote….well there were two stuck together, so there are two winners, Shirley Chan and Amy O.W!  Email us over at the website to claim your prize and give us your shipping address.  Prizes must be claimed by December 31, 2011. 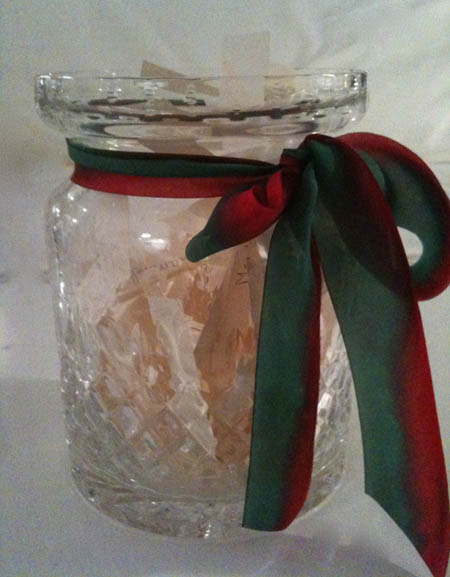 The Delicate Pen and my savvy, stationer friends over at Pipo Press recently teamed up to create a baby announcement.  The mother, Amy, was excited to announce a girl, after proudly having two boys previously.  To announce a daughter for child number three was going to be great fun, so first I lettered the word “Daughter.” Pipo Press drop shaded the lettering for double impact.  I then lettered the baby’s name, once it was decided upon. The White family moved into a new home at the same time of the baby’s birth, so we suggested they take the opportunity to use the announcement as an address notification as well.  On the reverse side we lettered, “New residence….new resident” with the updated  address and family’s name underneath. Pipo Press then did the final layout and printing on 5 by 7 cards with their signature curved corners, and voilá! 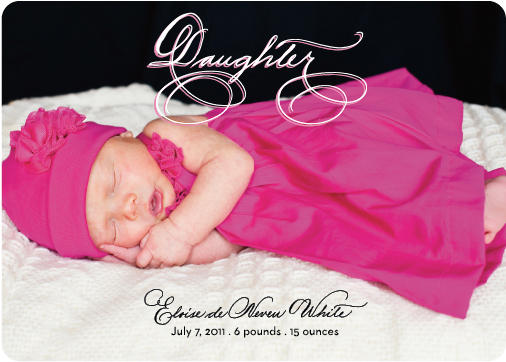 I love that  baby Eloise has introduced herself to the world in hot pink instead of the traditional pastel shade. The middle name of “deNevue” is a family name and she will be lovingly called “Edie.”

We shall also take this opportunity for our own announcement!  We will have a Give Away very soon on this site.  Stop back soon!

Greetings from the Licensing Expo!  What a wonderful atmosphere.  I am surrounded by gifted and generous exhibitors! 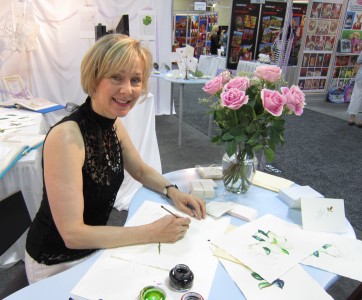 Some of you may know that we license many designs here at The Delicate Pen.  I will share some images along the way.  Our main licenses are greeting cards manufactured through Design Design. You may see one here.

I was invited to participate in the Licensing Expo that will be next week.  I will be doing demos in Booth 5718 and also debuting a children’s character that has been under secretive wraps for many months. We’ll unveil her (at least you know she is a she) on the blog once she makes a grand entrance at the show. If you are in Vegas,  come check out our booth! I have lots of ideas to share with all you manufacturers! 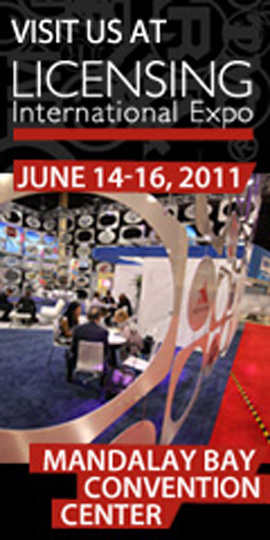 We were balancing several big projects here in the studio, including a calligraphy video we are shooting, and many “Day Of”  items for several recent and upcoming weddings. (Hence my absence from the blog for a couple of weeks.) “Day Of” is industry lingo for the place cards, programs and seating scrolls that are used on the actual wedding day. While we catch up here in the studio, I will be blogging on Tuesdays and Thursdays.

I can’t help but share a video I took of some baby birds that I watched incessantly for a few days this spring, outside the window where I was working.  A videographer I am not, but hopefully it will still be interesting for you. I think the ending is kind of funny.

Whenever I visit another artist’s workspace, I imagine what the late 19th century artist salons and later, the artist colonies, must have been like! Remember all those impressionists, who summered together,  sharing ideas?  What about Appledore Island! Oh, to have been a guest of Celia Thaxter’s for the summer!  (I visited Appledore and Celia’s garden, and I will tell you about my visit one day!)

I have a trio of Inspiration Boards above my light table where I do most of my work.  Tidbits of clippings, colors and quotes that constantly rotate, guided by my whim.  When I visited Amanda Pearl’s atelier (see this week’s earlier postings),  I just loved her oversized Inspiration Board. 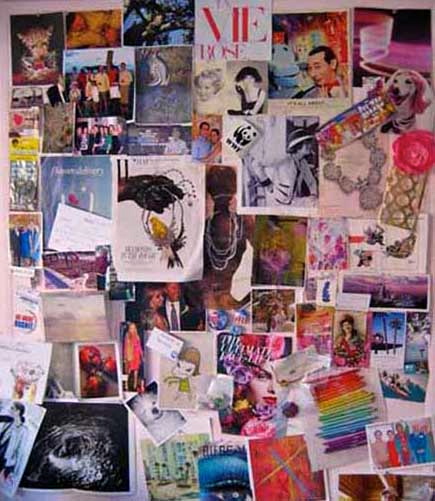 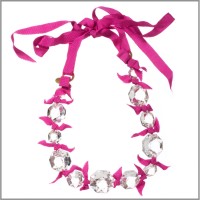 One of Amanda’s signature ideas is creating jewelry out of vintage chandelier crystals.

Ding! I have a chandelier! I may just have to steal a few crystals from it, so she can create  a necklace for me!  I’ll keep you posted on this idea! 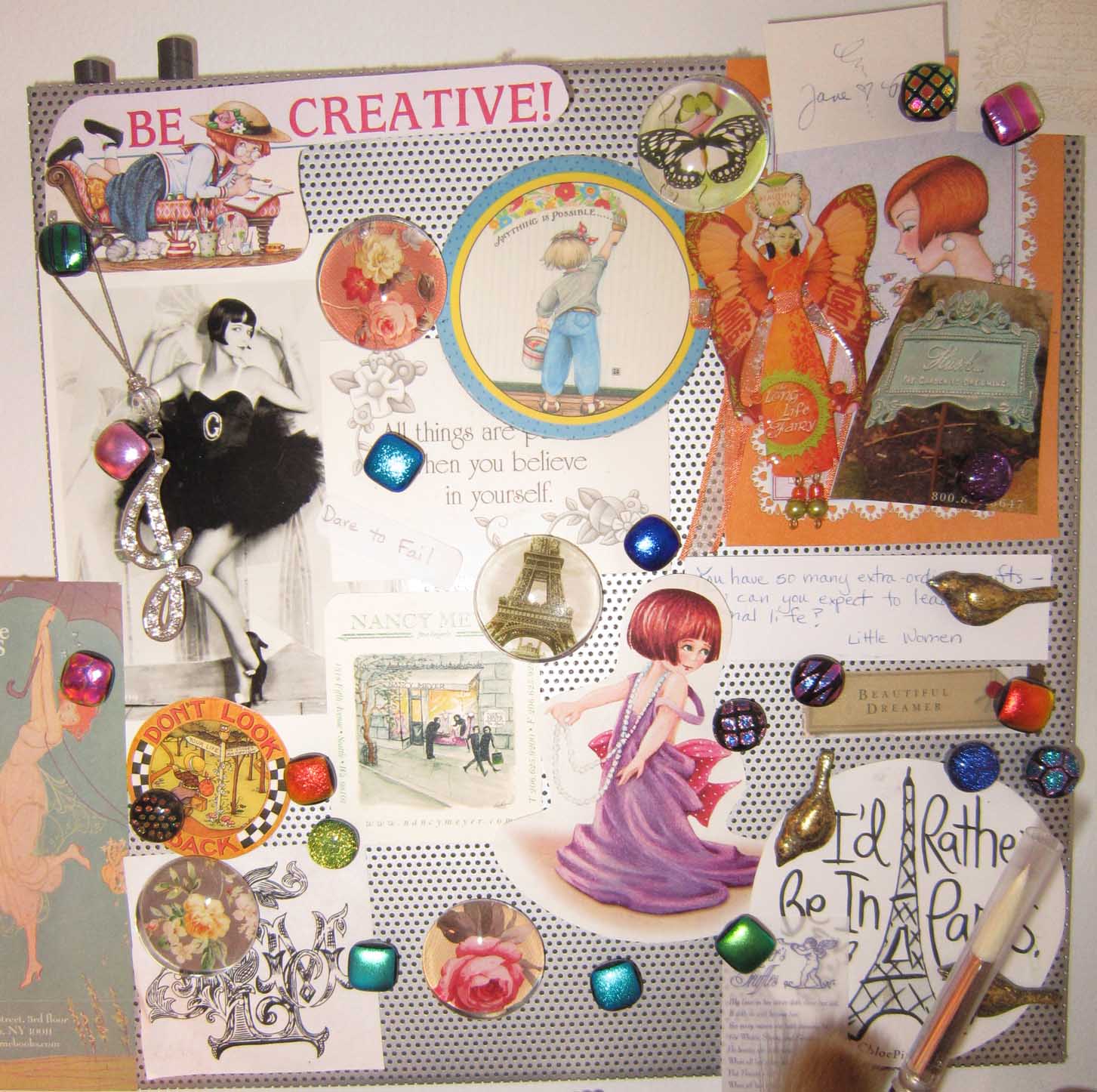 …one of my Inspiration Boards.

So sorry I didn’t blog last week! We were juggling many projects including this one that we teased you with, over a week ago.  I sometimes get commissioned to paint furniture.  Here is a before and after photo of a vintage desk.  We had no idea of the history of the desk, but it is on the petite size, so it may have been a child’s desk. It had such nice curves and overall design, that we decided that it would probably be perfect as a small dressing table. I painted it with a toast to “Jessica McClintock” with our signature swoops and and swirls. We chose Restoration Hardware’s Silver Sage green as a base, with ivory and pewter highlights.  I painted the back of the piece as well, so that if it is ever is “floated” in a room, it will have extra pizzazz. (Also correctly spelled pizazz, interestingly enough.) After many trips to Anthropologie, and numerous experiments with colorful knobs, we settled on these simple glass ones. The knobs add a little sparkle to the piece, but keep the painted design the main focus. 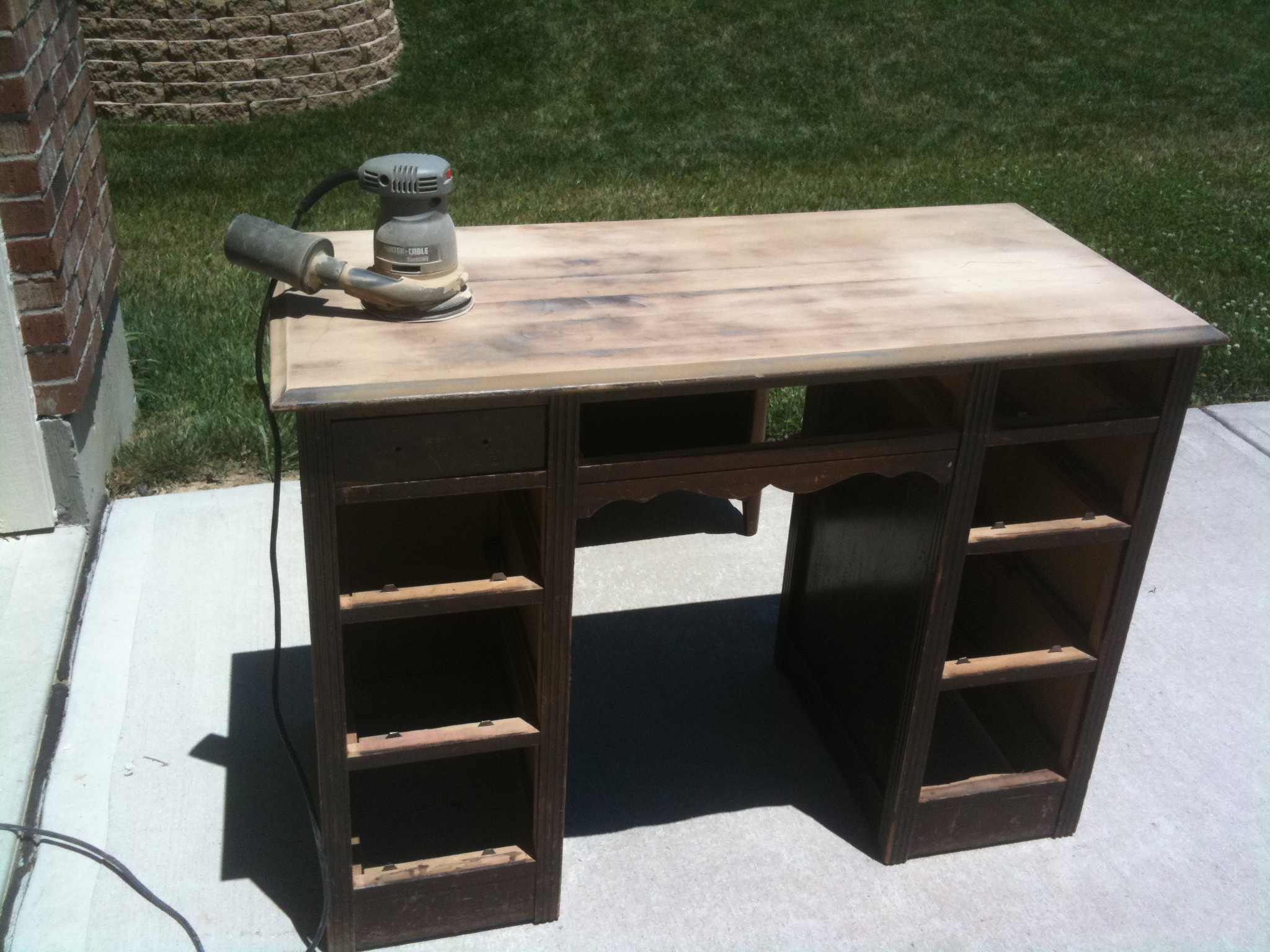 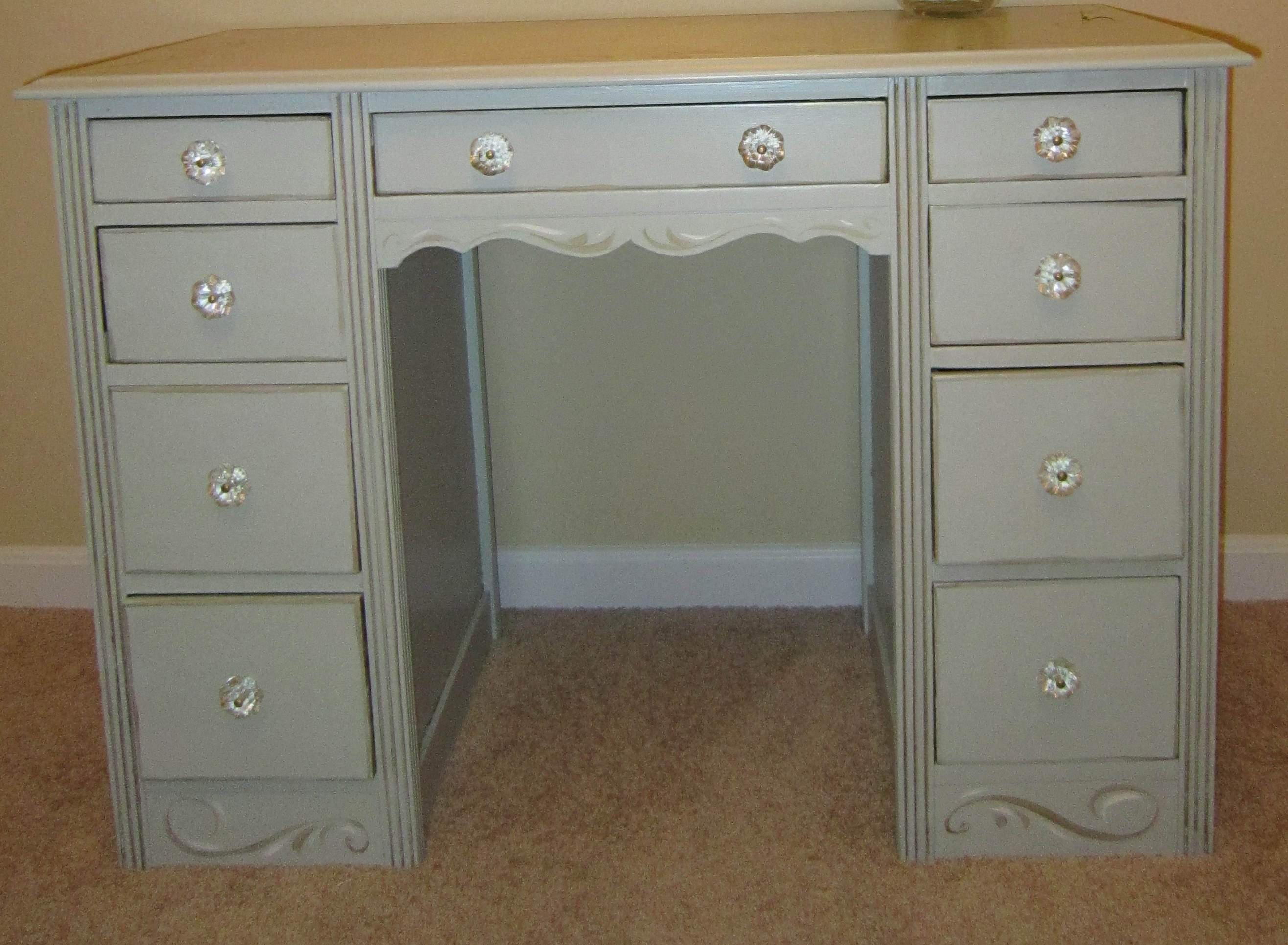 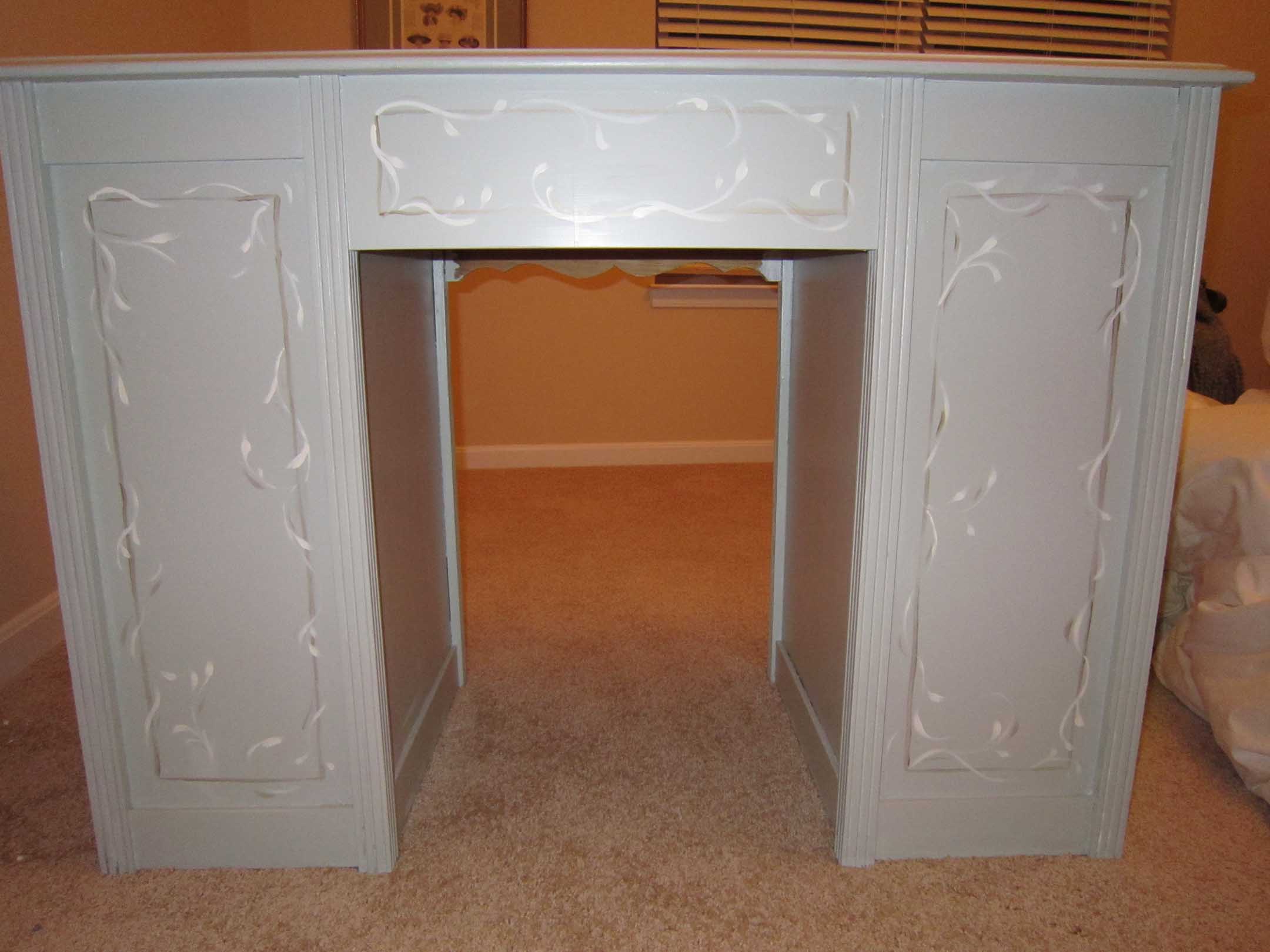 The back of the dressing table. 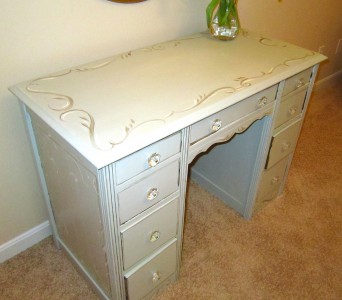 This is a little teaser of something I am working on.  I should be ready to show you the entire project on Monday, so stop back and see. 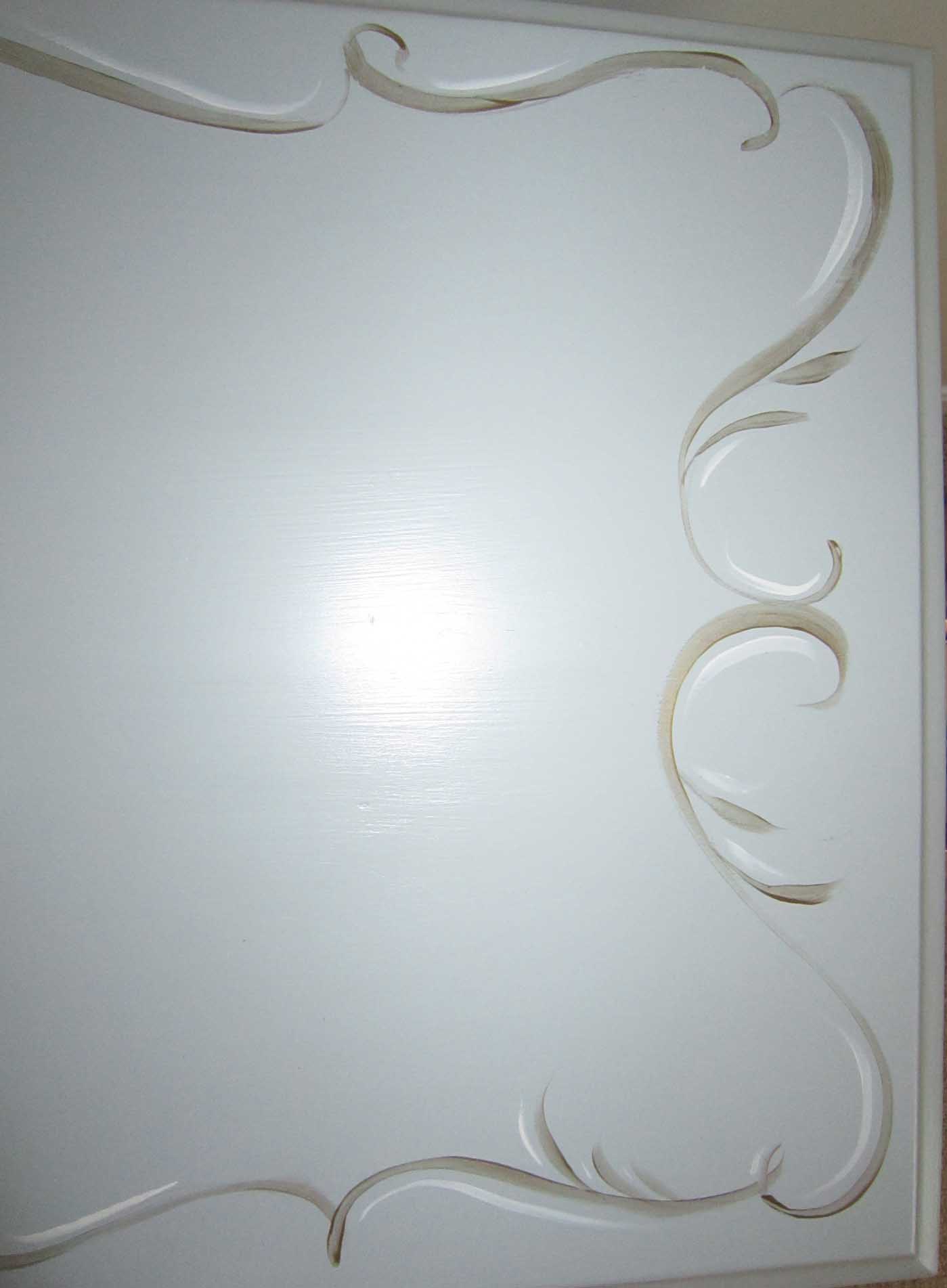